Check out my friend Lainie's website. She's my most favorite artist, and one of my favorite people. I think she should be famous.
Posted by TK at 3:41 PM 1 comment:

I've been teaching a theatre class at a dance studio in town. It started as two classes, but the younger students' class was too small, so it was combined with the older class. Now I have one class and the students range from 6 to 16. It's been interesting. The classes are fun, but it's still hard to gauge what they've learned this month. They know the areas of the stage as much as they know left from right, and last week they caught on pretty quick to vocal expression. There are a couple of kids who are really outgoing and a couple shyer ones. Overall, so far, it's been fun. But (here's the blogging excuse) I seem to have no time for anything anymore. Which really isn't true. I'm just having too much fun hanging out to get the important things done. At least the class forces me to sit down and write a lesson plan each week. This week we're going to talk about beats. I'm having a little trouble planning for this one since there are a few students who can't read much yet (being only in first grade).

In my knitting world I'm all over the place. I started a rattle for Aimee's cousin's new son, but I need a cat toy for the inside and I haven't made it to the store for one yet. So I started the shorts for Sandman. I think those will move pretty quickly, but I don't get much couch time to work on them. I've been watching Firefly with Jacque, and we're going to try some game knitting on the next episode. I think I need something wacky right now. I need to seam the Audrey sweater and do some finishing knitting, but I haven't been interested in that since I picked up the other things. There's also a hat I really want to make for a friend in Chicago, where I'm going in a couple weeks, so I'll have to pick that up soon, too. I can probably knit most of that on the airplane, though, so I'm not too worried.

I don't have any new knitting pictures, so here's a photo from last week's climbing adventure. Picture courtesy of Karl. 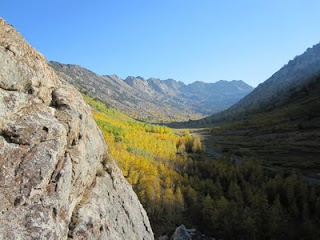 What I Talk About