Sabrina Gschwandtner wrote a short article for Interweave Knits about my friend Aimee Lee. Aimee often comments here, so she might be familiar to you. If not, or even if, read the article, go to her website, tell others about her, and buy her work! She's an artist, and makes her living that way. I'm amazed and lucky to have friends like her.
Posted by TK at 12:13 AM 1 comment:

NaKniSweMo is a No Go

I thought about joining NaKniSweMo this year. Of the 434 projects in my Ravelry queue, 268 of them are sweaters. It seemed like joining along with the 700 other people who are in the Ravelry group would get those needles moving through 50,000 stitches in no time. Alas, November is just too busy for more deadlines.

Brian's birthday is in November, on Thanksgiving this year. We're going to spend it with his mom and then head to San Francisco the next day to see Lucero in concert. We'll see our friend Dan, which is always a treat. Brian suggested that he'd like a pair of socks, so I've been whipping through those. He tried the first one on, after the foot was finished, before the heel, and we discovered it was too big. Gauge swatches lie. So I ripped and started over with more negative ease and better math. The sock is still a little roomy, but it will do. He also mentioned that he wouldn't mind a fun color. This, after I'd already started knitting! He's so green-gray-blue-black that I didn't think he'd like something with some color. I guess it means I'll have to knit a second pair later. 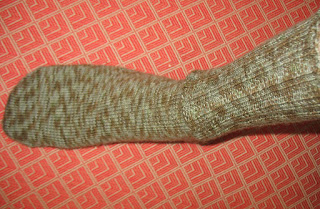 I finished all the knitting on Goodale. I still need to tack down the front flaps, but I need space and space-out time for that. I've been working late and then too tired for seaming, so that's on hold. I'm not sure who this sweater will fit, anyway. It fits me fine, but I can't wear wool. I'll probably give it to Jen. Who knows when I'll see her next. My life is so empty without a visit to see her and the kids, I might have to give this sweater to someone else just so it doesn't make me sad. 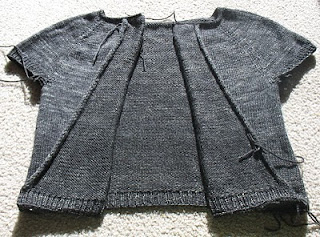 While I was waiting for Goodale to block, I started a pair of long fingerless mitts, inspired by the pattern at The Purl Bee. My gauge is completely off, and I didn't follow the pattern for the thumb. Turns out I did the thumb exactly like the pattern, though I went straight to the ribbing, eliminating the striped rounds. I'm having lots of fun knitting these. I think I might make a matching hat, maybe with a few slipped-stitch ridges running up the sides into the decreases. 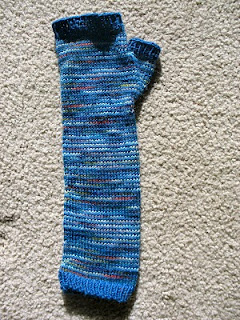 Finally, I made a quick pair of slippers for Brian. They are kind of silly, with bulky feet and worsted cuffs, but the pattern was free. They actually turned out pretty well. He wears them, which is the most important part. Thankfully, Brian likes knitted gifts.


I think I'll still make a sweater, but I don't know if it will have enough stitches to qualify for NaKniSweMo. I will most definitely take longer than the rest of November to finish it.
Posted by TK at 2:12 PM No comments:

What I Talk About